Ways to keep busy in Suva

Some more stuff came through my inbox, I'm copying and pasting and letting you know about it 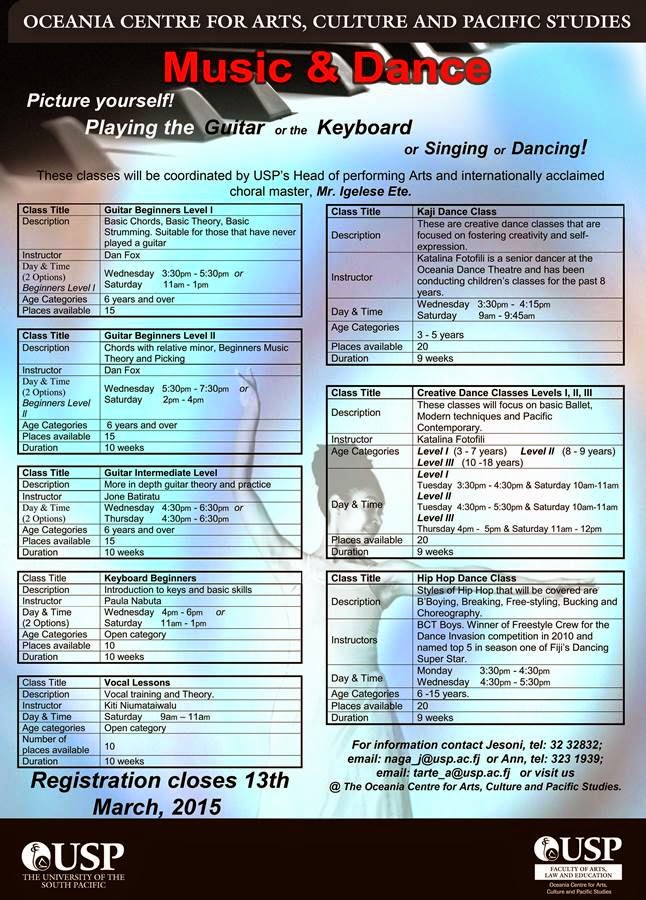 Established in 1997 at USP because of concerns for cultural conservation and development of Pacific heritage. The Oceania Centre has grown into a leading creative centre for the region. Artists from across the region have contributed to the development of contemporary Oceanic art and have toured internationally presenting their unique forms of Visual Arts, Dance and Music to the world.

Every semester the Oceania Centre offers a full line of Visual Arts, Dance, and Music classes to the Suva community. Here's their list for early 2015

Tourism Fiji Events
Fiji’s events calendar is loaded with festivals and celebrations to delight and inspire you. Flamboyant cultural festivals are held throughout the year, many of which are Hindu festivals put on by the Fijian-Indian community. Experience the week-long carnival-type festivals in Nadi, Suva and Lautoka, or for something more cultural head to Savusavu or Levuka. There are 12 public holidays in the Fijian calendar, some of which feature traditional dance and other public displays. Yachting regatta’s and music festivals are also popular, and there are regular rugby, golf and surfing tournaments. Whether you’re into music, culture or sport, you’ll easily find an event or festival for you.

Fijian Indian Cooking Class
A friend of mine is trying to find a sixth person so this class will make. Here's the details:
Organiser: Laura Itzkowitz

Contact: litzkowitz@gmail.com
Cost: $150 – Deposit of $50 required by 10 March
Meeting Place: Private home in Nasese
Date / Time: Friday, 13 March 5:30-8pm and Saturday, 14 March 4-7pm
Learn how to make delicious curries, chutneys, samosas and other vegetarian Fijian Indian delicacies. This two evening class will be a shorter version of Ruby’s Masterclass’s typical 6-week session. We’ll learn about the spices traditionally used in Indian cooking and make our own delicious treats each evening. You will be provided with a spice pack to take home and all recipes. Minimum 6, maximum 8 participants.

Modern Prejudice Theory suggests that the incidence of old fashioned blatant prejudice has declined significantly over the past few decades. The research in this area has generally shown that advantaged group members are extremely reluctant to directly endorse any negative feelings towards disadvantaged groups and/or a desire for social distance from these groups.  The reduction in blatant prejudice may be due to the desire for people to present themselves as unbiased and egalitarian. Additionally, in many societies, discriminatory practices are illegal and people who show prejudice are objects of disapproval. More importantly, a major underlying assumption of Modern Prejudice Theory is old-fashioned blatant prejudice has been replaced with more subtle and indirect forms of prejudicial behaviors (i.e., modern prejudice). One signification criticism of this perspective involves the almost exclusive focus on the attitudes and actions of White Americans.  There has been a dearth of research assessing how modern prejudice views might influence intergroup responses among people of color or cultures with minimal social sanctions against the expression of prejudice.
To begin to address the significant limitations in the modern prejudice literature, the present study explored the incidence of old fashioned homonegativity and modern homonegativity among a sample of Fijians. There was also an examination of the moderating role of gender, ethnicity (I-Taukei, Indo-Fijians), and religion (i.e., Methodist, Hindu, Muslim). In addition, the mediating role of interpersonal contact with homosexuals was also explored. Despite anecdotal evidence of pervasive homophobia in the Pacific Region, this study represents one of the first empirical explorations of this issue in a Fijian population.  The findings revealed significant gender, ethnic, and religious differences in homonegativity among Fijians. Additionally, interpersonal contact with homosexuals had a significant influence on homonegative responses.