Dye? I earned this gray

From time to time I've considered dying the tips of my hair blue.

I saw a woman at World Makerfaire who totally ROCKED a rainbow of colors, I admit I was tempted to see what the kaleidescope of color that I saw would look like on me.

But I've never been tempted to dye my hair to cover my gray. Here's what I look like. Or rather, what I looked like in the last pic I can find of me that shows my gray. Turns out that even though those white strands look incredibly bright in my mirror, apparently they're mostly invisible to my camera!
Why don't I just grin and dye it? I mean, I get my eyebrows threaded, waxed, tweezed, whatever. I love pedicures and a freshly painted tootsies

One of the women that I met and listened to over the course of the retreat related her story of transitioning out of her corporate lifestyle and into a more simple way of living. I remember her telling a group of us about how much she hated having her hair dyed. She hated everything about it - she hated sitting in the chair when she could be someplace else more productive. She hated the chemicals that were on her skin and hair. She hated the cost of the process and most of all she hated that it had to be repeated on a regular basis.

Now, not all that long before that retreat I'd been looking in the mirror and seen a gray hair. I'd looked at in in shock, pulled it, and then ran my fingers through my hair AND FOUND ANOTHER! I pulled that one too and stumbled out into the living room.

"I have a GRAY HAIR!" I announced to my husband.

He calmly looked at me.

"Oh, I thought you knew. You have lots of them."

Clearly his reaction did not correlate to my level of surprise.

Months went by, I accrued additonal gray hairs, but I never really got to a tipping point. Then, after the retreat, I realized I was perfectly ok with my silver. After all, I earned it.

There's a chipmunk that just ran across the roof. I snuck up here to warm up in the Indian winter sun while our clothes dry. I have traffic noise on my right and the smell of lentils and other yummies cooking downstairs.

Well, not really homesick, because I'm still not sure where home really is right now, but definitely have that "I wanna be back" feeling and really not looking forward to schlepping big heavy bags and being folded into origami for a crazy long flight back.

I miss my family. They're scattered all over,  so even if I stop moving or move closer to one that doesn't bring the rest of them any closer.

Sometimes there's a lot to be said for putting down roots.

In another 5 minutes I'll go downstairs and be utterly captivated by something again. This momentary sigh will be eclipsed by a squeal of excitement. But sometimes in the depth of the night, sometimes in the middle of the afternoon, sometimes I wish my life was a little less interesting. 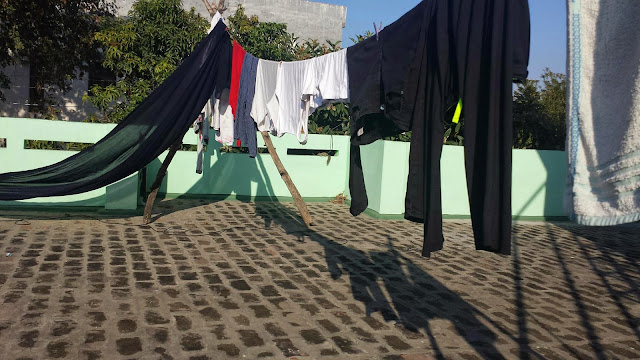 Posted by Amerika at Thursday, January 15, 2015 No comments: