Watching Your Money Go Up in Smoke

Diwali, the Festival of Lights, is a huge thing here in Fiji. It's an official Fijian Holiday and according to Wikipedia,


is also known as Deepavali. It's an ancient Hindu festival celebrated in autumn every year. The festival spiritually signifies the victory of light over darkness, knowledge over ignorance, good over evil, and hope over despair. The festival preparations and rituals typically extend over a five day period, but the main festival night of Diwali coincides with the darkest, new moon night of the Hindu Lunisolar month Kartika. In the Gregorian calendar, Diwali night falls between mid-October and mid-November.

Before Diwali night, people clean, renovate and decorate their homes. On Diwali night, Hindus dress up in new clothes or their best outfit, light up diyas (lamps and candles) inside and outside their home, participate in family puja typically to Lakshmi – the goddess of wealth and prosperity. After puja (prayers), fireworks follow, then a family feast including mithai (sweets), and an exchange of gifts between family members and close friends. Diwali also marks a major shopping period in nations where it is celebrated.

The kids took the fireworks part of the whole thing very seriously. While half a dozen families were inside eating sweets and enjoying a family feast the kids were outside working their way through half of Rup's Big Bear's inventory of fireworks.

I have to say, I was impressed. I've lit more than my share of fuses, but I can't remember ever doing so in the rain. Of course, I also don't remember it ever raining on the 4th of July or New Year's Eve either.

Either way, I just watched our money go up in smoke one Roman candle and one fountain of flame and sparkler at a time. And you know what? It was pretty fun.

Happy Diwali y'all. The victory of light over darkness, knowledge over ignorance, good over evil, and hope over despair is definitely something to celebrate. Personally, I'm tickled pink that I don't have a long dark winter ahead of me here in the Southern Hemisphere. That's a triumph of light over dark if I ever saw one. 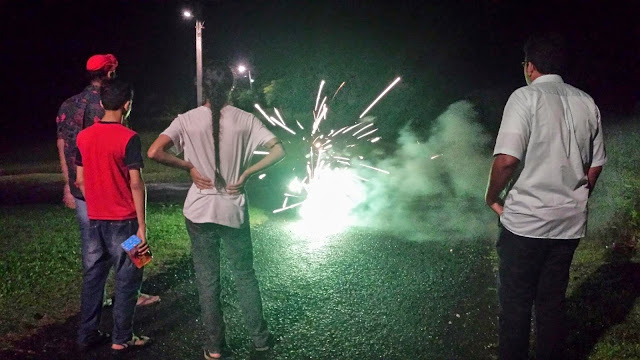